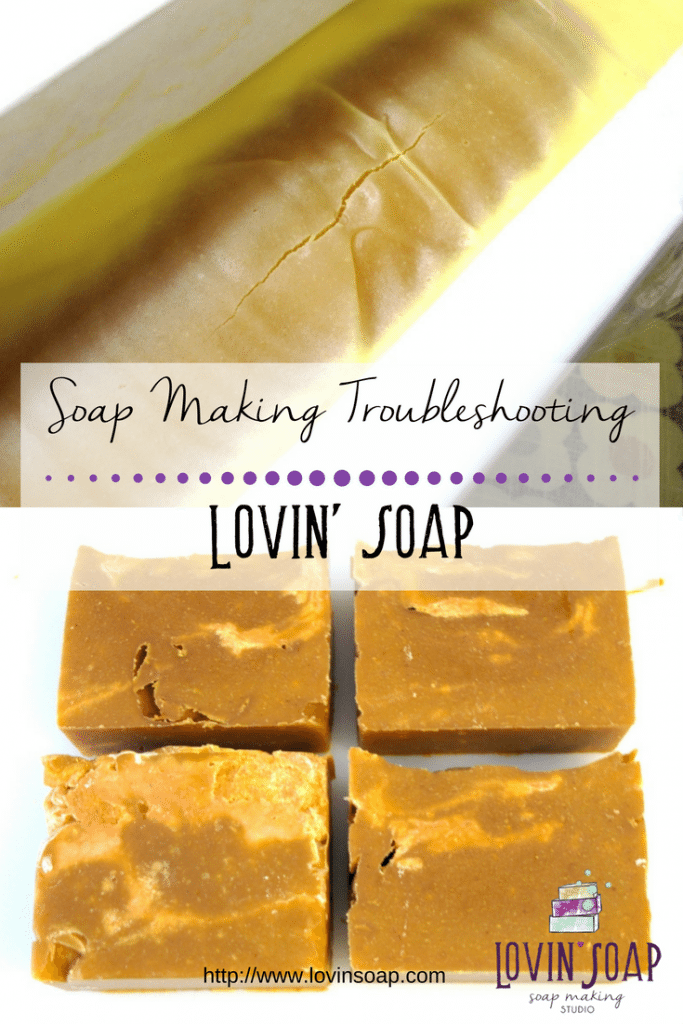 Every soapmaker will come across overheating issues at one time or another. Maybe you get in a hurry and mix your soap when the oils and lye are too hot. Or perhaps you purchase a new mold and over insulate it. It happens to us all!

Overheating is also common when soaping with any kind of additive that has sugar including sugar itself, honey, beer and milk. Here are some common signs of overheating and what you can do if it happens.

The soap has a crack up the middle of it 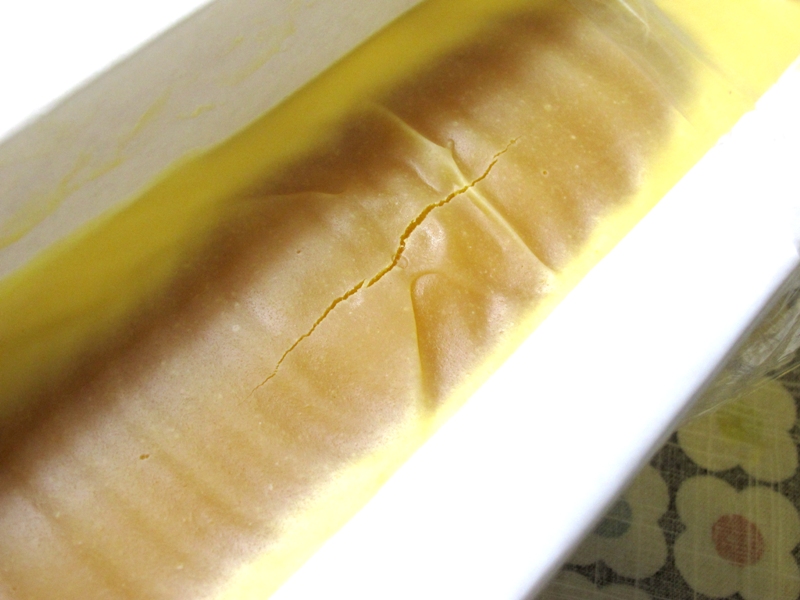 If you find your soap cracking then try to cool it down.  Remove any insulation that you might have on your soap (blankets, etc.), put your soap in the fridge if it will fit or simply leave it un-insulated in a cool place with plenty of air circulation.  It should start to cool down and stop cracking.  You can actually use a spatula or a gloved hand to flatten down the crack.

The soap is crawling or mushrooming out of the mold 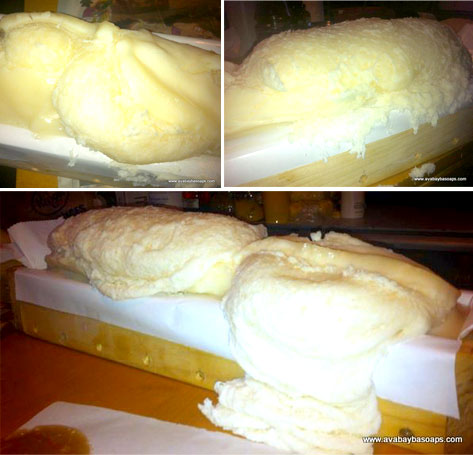 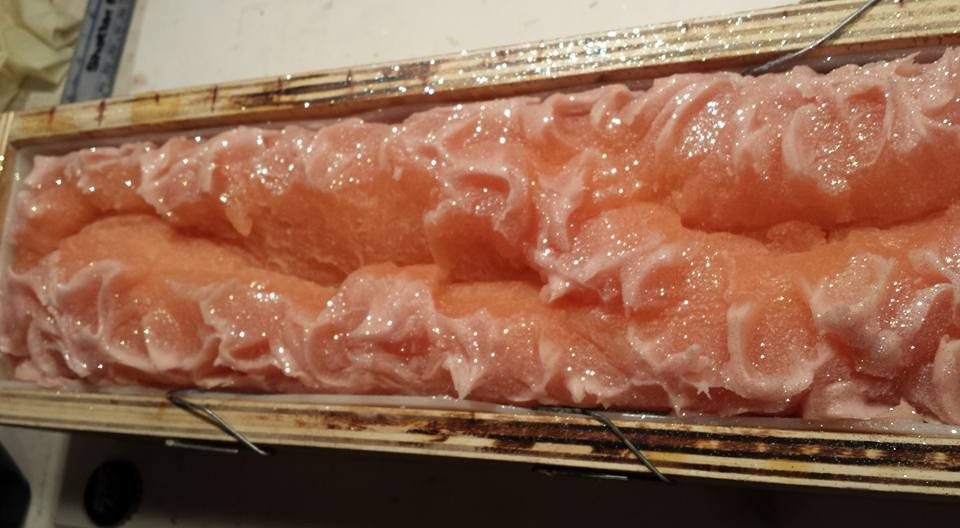 EEK!  If you catch this happening in process see if you can dump what’s in the mold into a mixing container to let it cool off.  Be careful as the soap will be hot.

Usually you don’t catch it in time and you find it already volcano’d all over the table that your mold is sitting on.  Scoop up what you can and put it back into the mold.  It won’t be the prettiest soap in the world but it will still be soap.

The soap has a tunnel through the middle of it 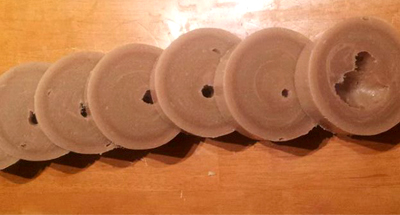 This is another sign of overheating.  Since it’s in the middle, you don’t really know that it’s happening until you cut it.  Rebatch it or keep for personal use.

The soap has a layer of oil on top

If it is just a bit, more like a sweat than a pool…then just leave it and the soap will probably reabsorb.  If it is enough oil to pool up and move around if you tilt the mold then you might want to rebatch.  You can do so immediately.  Simply plop it into a crockpot and hot process it.

I have not actually had this happen.  I’ve seen pictures online and have heard the tales.  I would actually keep this one.  It might be a good soap for Halloween!  (But next time…be sure to soap cooler. This is usually a heat issue.)

Soap has separated in the mold

This could be due to false trace or simply not reaching a steady emulsion.  Dump the mixture back into your mixing container and stir some more until emulsified.

I would re-batch.  Cut your soap into cubes.  If it is fresh soap, you shouldn’t need to add water.  Put it into the crock pot or pan in the oven.  Once the soap get’s loose and gel-like stir like crazy!

The soap in the above picture was scented using a spice FO and a bit of Clove EO.  Both are FAST movers.  I also made my lye solution using coconut milk.  I couldn’t completely mix the soap before it started setting up.  You can easily see the lye heavy parts in the soap as well as lye pockets that formed.

If you are sure that you measured everything correctly then you might have had a mixing issue.  I would chunk it up and re-batch as above.

Fragrance oils can cause a lot of issues with soap making.  Make sure that you purchase fragrance oils from reputable suppliers that test to insure compatibility with cold process soap.

You can either reserve the soap for personal use or re-batch.

Some fragrance oil causes seizing.  You bring your soap to trace, add the fragrance and it gets hard and lumpy.  Some soapers like to call this “soap on a stick.”

Your soap is seizing!  The best thing to do here is to dump the mixture into a crock pot and hot process it.

Some fragrance oils accelerate trace.  This means that once you add them to your soap mixture…it moves fast getting thick.  Not quite bad as a seize…still workable.

These fragrance oils (though tricky) are okay to use.  To slow them down a bit make sure you use full water.  I also recommend adding the fragrance oil to your oils before adding the lye.  Then stir with a whisk to trace.  It won’t move as fast as using a stick blender.

You add the fragrance oil to your soap and it immediately heats up and goes through gel phase right in the pot.

Some fragrances cause your soap mixture to heat up.  These include floral fragrance oils and spice fragrance oils.  Soap cooler, use full water and add the fragrance oil to your oils before adding the lye.  Stir with a whisk to bring to trace.  If your soap is going through gel phase right in the pot you can go ahead and let it gel completely in the pot (insulate if needed) and then dump it in a mold.

You go to cut your soap and it has beads of liquid or your soap is oozing a bit of liquid.

Sometimes fragrance oils can ooze or bead out from a soap.  This might have something to do with overheating as well.  I would let the soap sit for a day or two to see if it reabsorbs the liquid.  You can also wipe off if it’s a very small amount.

Soap is crumbly upon un-molding

This could be because of two reasons.  Your soap could be crumbly because it did not go through gel phase.  This is especially common in soap that has partially gelled.  The center is solid and hard but the edges are crumbly.  This is just a cosmetic issue…the soap is not bad.  If you want to avoid this issue then make sure that your soap completely goes through gel phase.  You might need to help it along by insulating your mold or putting it into a warm oven.

The other reason for crumbly soap is that it could be lye heavy.  Wait a couple of days and do a zap test.

If you’re new to soapmaking I would just throw this batch away.  Some people will tell you to re-batch adding more oil or to shred and use as laundry soap.  Those are certainly more advanced options you might want to consider after you’ve had some more batches under your belt.

Soap is soft and squishy like play-dough upon un-molding

There are a couple of reasons that this can happen.  First take a look at your recipe.  Are there are high percentage of soft oils such as olive, sweet almond, castor, apricot kernel, etc.?  Did you use the full water amount?  Soaps high in soft oils using full water are going to be pretty soft when un-molding.  Wait two or three extra days before un-molding.  Next time reformulate your recipe to include a higher percentage of hard oils or a steeper water discount.

If you have a well balanced recipe with plenty of hard oils then another reason might be that you mis-measured and did not add enough lye to the batch.  Since you don’t really have a way of knowing how much more to add, I would just save this soap for personal use.  It should harden up a bit with a cure.

Soap will not un-mold from a silicone mold

When soaping in silicone molds without liners you want to make sure you are using a recipe with a high amount of hard or brittle oils (60%+).  It also helps if your soap goes through gel phase as it will be harder upon un-molding.  If you find yourself in this situation, put the soap in the fridge for about two hours to freeze solid.  Then try and remove.

Soap will not trace or is slow to trace

Soap made with high amounts of olive oil take the longest to trace.  Even then…a two pound batch should definitely reach trace in less than ten minutes when using a stick blender.  So if you’ve been stirring for that or longer…then something might wrong.

First check your water amount.  Using high amounts of water with recipes high in olive oil have a hard time tracing.  I always use a water discount with recipe that has 60%+ of olive oil.

Did you add your lye solution?  Don’t laugh!  This has happened before to many soapmakers.

If your soap will not trace…then you might have lye issues.  Are you using a new container of lye?  Was it clumpy or hard when you used it?  This could suggest that it has absorbed moisture somehow so your measurements will be way off.  Instead of weighing out the correct amount of lye you’ve weighed out lye and the moisture that it’s absorbed.  If your lye is clumpy or hard then get new lye.

We use cookies to ensure that we give you the best experience on our website. If you continue to use this site we will assume that you are happy with it.Ok