Planning Holiday Inventory and Production – How Do You Know How Much Product To Make?

It can be hard to know how much soap to make for the holiday season! We know that holiday sales are normally going to be higher than the rest of the year, especially if you are doing craft fairs and shows.

Knowing how much soap to make is even more complicated by the fact that soap needs at least 4 weeks to cure. If you run out on December 10, you’re out of luck. Remember that you can always make other items quickly to fill your holiday booth such as lotion, bath fizzies, body scrub, lip balm, body oil…and other bath and body products that don’t have a cure time.

Here is an article I found that says “Many small and mid-sized retailers will do as much as 20-40 percent of their annual sales in the final two months of the calendar year, according to the National Retail Federation (NRF), the nation’s largest retail trade association.” – Inc. (read more)

There doesn’t seem to be an exact answer and what works for your business might be different from 10 other soap makers. But let’s take a look at what some other soap business owners do to prep for the holidays. 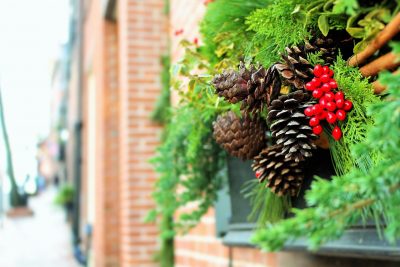 So how you know how much soap to make for the holiday season?

Here are some responses in our Facebook group Saponification Nation (please join!) from business owners.

Charlene Simon says This has been a challenge for me adding stores for the last two seasons (opening both in Oct. right as the holidays begin to swing). I up man power, usually by Oct. I have an extra labeler and packer + 2 temporary makers. I have last year’s $ numbers in stock made and waiting on the shelf by November 15th which means we started making that inventory in the beginning of Sept (mainly the CP soap). This is relative to your needs and sales, of course.

So, by the end of Oct. most of last year’s $ is in stock and on the shelves waiting. By on-shelf I mean in backup storage not on the showroom floor. That must always be full. It’s easier to maintain back of the house inventory however, in the beginning this was impossible for just me and it would have been financially crippling. Like now, it took lots of labor except now I’m able to hire help instead of doing it alone or with my kids!

From that point we maintain production by keeping our stock levels on shelf at an amount to where we are maintaining it as usual, prepared for growth that year. I keep staff until the end of the season.

It’s really a numbers game once you get into a groove.

If I didn’t have numbers to go by and like in the case of our Missouri store, I had no idea what the number might be, I made the amount of $ I wanted to produce out of that store + enough to keep the store looking full. I gambled on that $ in inventory but it’s always better to have product to sell then to be scrambling and frustrated you’re not keeping up.

Angela says During the year I like to have a stock of 15-30 of each scent. For the holiday season I double that and just keep on top of it every day. Meaning each day I check and see what I have and move it up in my schedule to make if I have to. Once we hit mid-end of November, I go back to “normal” and pray I have enough. So far, that system has worked for me.

Dana says Ohhhhhhh, the million dollar question right there!! I mainly do fall shows and about 13 of them from October through the 2nd week in December. Because we added a couple shows this year I actually started taking and recording inventory at the end of every show…..and this is coming from the gal who has 18 different scents of soap bars, ugh! I won’t do it any other way from now on. I’m also amazed how each show has a personality of its own. Last week’s show, I sold ALL soap and maybe two scrubs. The show before that I sold a majority of lotion and little soap. We LOVE shows!!

So I guess to really answer the question….starting in September I will make three loaves of everything and gauge off the inventory I take after a show. Some I have not made any more of and some I have had to make several more. What’s tough is right now I have two shows left and maybe 6 bars left of something…..so I am plagued with making another loaf to possible have some left over or just call it a day and sell out…..oh the pain of that decision.

Holly says I make 2 times what I made the year before. I start in August then I can see if I need to make more in October to have ready for the holidays.

Pat says I try to have everything made before Thanksgiving and then hope for the best. Maybe one day, I’ll need to learn to do HP for those last minute emergencies!

Paige says I’m just winging it and making sure I collect data to use for next year.

Melanie says I try to start in the summer getting my stock ready, but my “problem” comes from unexpected wholesale orders or restocks. Also what was a big seller at last year’s show may not sell at all at this year’s show. One year I sold an entire log of peppermint soap within an hour. The next year no one bought peppermint soap. Go figure!

Kristen says This time of year I only make 16 lb batches, 48 bars. Doesn’t take much longer but ensures I have inventory.

Lauri says I usually make what I sold last year plus half more and start in Aug. This year however I am so messed up and don’t have much left. I sort of went mental this year. Don’t know where the time went.

Nikki says Pray 😉  I take last year’s sales and times it by 2.

Suzanne says I, like Nikki, pray. LOL. But I also step it up. I always have at least 70 bars of each scent on hand. As we get closer to the holidays, I double that. Gulp. Yes, I double it. My biggest sales months are November and December and I’ve been prepping for it already! By having this much in stock, I have never run out. Just as I do with my cooking for a family gathering, I’d rather have too much than not enough.

Daphne says I make enough for three months of shows..I actually start making my soap in March and the skin care in April. I do this drill about 3 1/ 2 times a year….I am making more soap than ever. As for skin care the lotions were really hot this, as someone mentioned above, is what sold lst year may be a little slow this year. I just get up at 5:00 am and work, work work…

Rachel says Since our wholesale orders are so hard to predict, it’s usually just a mad scramble to the finish line for us. We always run out of something. This year, it’s lotion bars and men’s line. Got plenty of soap, though!

TerriLin says I only carry ONE seasonal scent, Pumpkin Cheesecake Cinnamon. I do this full time and primarily wholesale so I restock when a particular soap falls below 22 bars (or two loaves). I carry more than 80 scents, and my batch size is 44-55 bars (depending on the soap) so on the rare occasion that I do run out of something I have a lot of choices. Still though …. some people get crazy. Two years ago I sold an entire batch of my Green Goodness soap in one week. I was out of it for my wholesale accounts and my markets for 5 weeks while the new batch cured. People acted as if I had intentionally betrayed them lol. Not much you can do about that kind of thing. I manufacture and store everything in my house, so there is no room to make double batches of things just because they “might” sell out in a week.

So what do you do to prepare for the holiday season? How do you determine how much inventory to make?

Thanks to all who participated and gave their advice.

225shares
We use cookies to ensure that we give you the best experience on our website. If you continue to use this site we will assume that you are happy with it.Ok