A Brief History of Soapmaking

Along with beer making and prostitution, soapmaking is one of the oldest industries in the world. 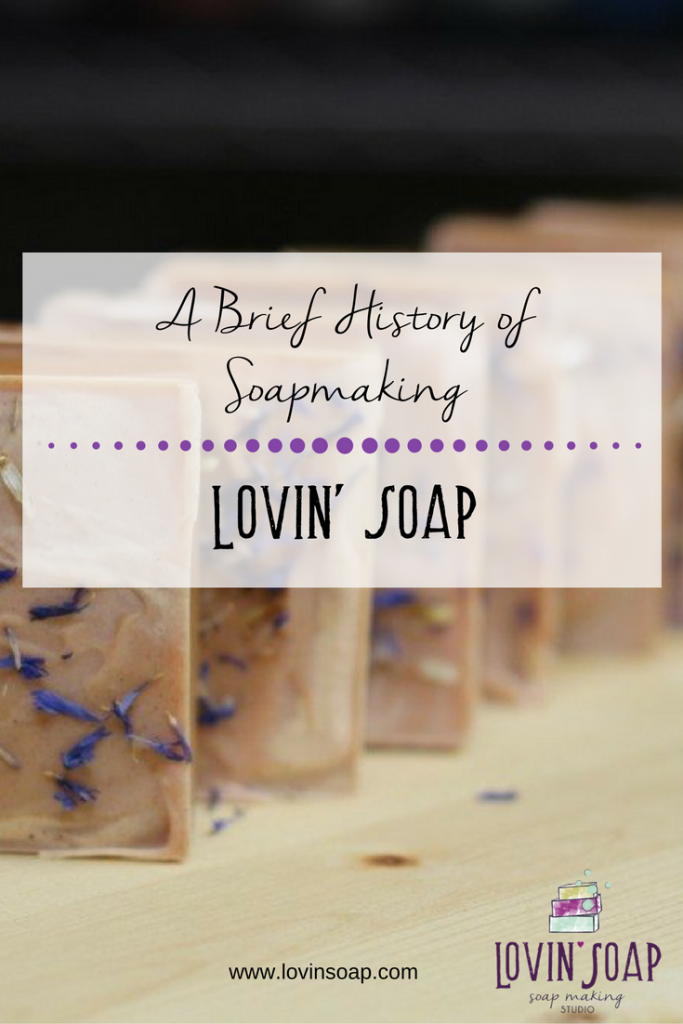 And because of this, the beginnings are a bit speculated. There have been ancient recipes and descriptions of soapmaking found throughout early civilizations.

The earliest evidence of soapmaking dates back to 2200 B.C. A Mesopotamiam clay tablet from that time was found and had a primitive soap recipe and directions inscribed on it. The formula consisted of cassia oil, potash (lye from hard wood ash) and water.

There are records of Babylonians making soap for a living. Wealthy Babylonians would have servants who rubbed their body with soap made of animal fats, water and ashes. The servants would then pour water from jars to rinse them off.

Ancient Egyptians left records of simple soapmaking processes, in which they mixed animal and vegetable oils with lye to make soap as early as 1550 B.C.

The more common (and fictional) legend of soapmaking’s beginnings is from around 1000 B.C. in Rome. There are many variations. Animal sacrifices were made on Mount Sapo (a fictional hill). Fats from the burnt animals would mix with ash and somehow made it down into the Tiber River clay (with the help of rain, perhaps) where clothes were being washed. It was quickly realized that clothes washed at this spot were getting cleaner and the connection was made between the fat, ashes and water.

Prior to the modern soapmaking of today, soapmaking in the 1800’s and early 1900’s was a utilitarian household chore.  It was standard for families to make soap to both bathe with and to use for household cleaning.  Soap was traditionally made by boiling together lard, rendered and cleaned from butchered animals or from grease drippings collected throughout the year, and homemade lye (liquid potash) which was made from pouring water over ashes and collecting the brown liquid that was leached out.  This didn’t make a hard soap like we have today; it made a soft or gel-like soap.  The soft soap was stored in a barrel or other container and scooped out for use.  The soft soap was made into a hard soap by adding salt and boiling it down.

It was difficult to determine the strength of the homemade lye and soap would sometimes come out “lye heavy”.  Often described as harsh or biting, many people remember this type of soap when they think of homemade lye soap.

Nowadays we are able to accurately calculate the amount of lye needed to saponify an oil or mix of oils.  We make soap that is superfated, which means there is a bit of oil left unsaponified to give our soap conditioning properties. A well-made soap can do wonders for the skin.

Learn to make your own natural handcrafted soap!

3shares
We use cookies to ensure that we give you the best experience on our website. If you continue to use this site we will assume that you are happy with it.Ok